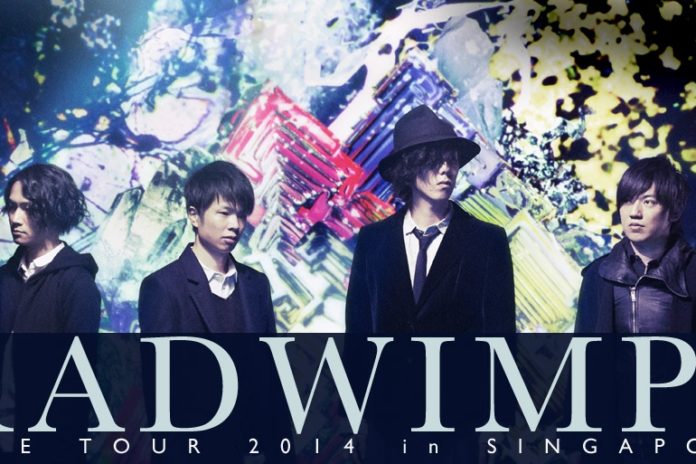 RADWIMPS GRAND PRIX 2014
The tour started on February 5 at Takasaki club FLEEZ in Japan. They are scheduled to hold a total of 44 shows at 33 venues, which includes their first overseas live performances in South Korea, Taiwan, Hong Kong and Singapore.

Tickets will be available at $78 from MiTicket+ (https://www.miticketplus.com/) from March 1, 2014. This is an all-standing concert. The concert is also part of the Japan Music Festival, a SOZO project.

RADWIMPS was first formed in 2001, whose 5 original members were friend since middle school. Their activities centred around Yokohama, while attending school. In 2002, they were awarded the grand prize at the Yokohama High School Music Festival, with the song “Moshi mo”, which was subsequently released as their debut single in May 2003. Their first album was also released in the same year in July through the independent label, Newtraxx. The members then went on hiatus to focus on studies after a further guest appearance at the Yokohama High School Music Festival.

In March 2004, members Kei Aso, Yusuke Saiki and Akio Shibafumi decided not to resume band activities. RADWIMPS resumed activities with new members Satoshi Yamaguchi and Yusuke Takeda, who were acquaintances of the original members when they met at the Yokohama High School Music Festival.

In between 2 tours, the band recorded and released their second album in March 2005. In November the same year, they made their major debut under Toshiba EMI with “Nijugoko-me no Senshokutai”, charting in the top 50. Their major breakthrough came with the release of their 3rd album, which charted at 13th place on the Oricon charts.

They achieved 2 number one singles with the release of “Order Made” and “Dada” in 2008 and 2011. Their 5th album was also certified Platinum by the Recording Industry Association of Japan.

Members of the public who wish to find out more about the concert may visit:
http://www.radwimps.jp
http://radwimps.japanmusicfestival.asia/

Our Mission – To celebrate Japanese Music by engaging fans in SE Asia and beyond, with the best and latest in Japanese Music Concert Experience – direct from Japan.

What is JMF? – JMF 2014 will be the culmination of a series of solo concerts – bringing the best in J-Pop, J-Rock and more JMF 2014 promises to engage over 10,000 concert attendees in Singapore, Jakarta and the region.

Members of the public who wish to find out more about the concert may visit:
http://japanmusicfestival.asia

DISCLAIMER: The materials seen above was sent to Anime Pilipinas as part of their promotional campaign, and we are not responsible for the content.

Disney+ launches in the Philippines this November 17