Philippine terrestrial network GMA-7 has announced in a television advertisement before the New Year the network’s anime line-up for 2014, which is lead by the highly-popular anime franchise One Piece.

The channel is set to air the franchise’s 10th anime film, One Piece: Strong World, as well as TV specials “Adventure in the Ocean’s Navel” (Special 1), “Open Upon the Great Sea! A Father’s Huge, HUGE Dream!” (Special 2), “Protect! The Last Great Performance” (Special 3), and “The Detective Memoirs of Chief Straw Hat Luffy” (Special 4).

The advertisement also announced that it is also set to air new seasons of the popular anime franchise.

20 years after his escape from Impel Down, the legendary pirate Shiki “the Golden Lion” reappears causing massive upheaval to the Marines. During his long seclusion, he was able to come up with a scheme to bring the World Government to his knees. On his way to execute the plan, Shiki crosses paths with the Straw Hat Pirates and becomes so impressed with Nami’s knowledge of meteorology that he abducts her to forcedly enlist her into his crew. Luffy and the gang end up on a strange land populated with monstrous beasts as they desperately search for Shiki and Nami. (Synopsis from Anime News Network)

ONE PIECE SPECIAL: Adventure in the Ocean’s Navel

The Straw Hats encounter a city in the middle of a whirlpool, called the Ocean’s Naval, that is being destroyed by giant monsters. These monsters supposedly protect a treasure capable of granting wishes, but in the process of defeating these guardians, the crew ends up releasing another evil. (Synopsis from WikiA)

The network has titled the First TV Special as “One Piece Special 1: Luffy’s Adventure at the Bottom of the Ocean”.

ONE PIECE: Open Upon the Great Sea! A Father’s Huge, HUGE Dream!

The crew comes across three children and two adults, posing as a family. As it turns out, the oldest child knows the location of a great treasure discovered by her late father, and they are on the run from a pirate with a dangerous ability. (Synopsis from WikiA)

The network has titled the Second TV Special as “One Piece Special 2: A Father’s Great Big Dream”.

It is the last performance of a great actor and playwright, but several actors suddenly quit. Luckily, the Straw Hats offer to take their place. However, the quitting actors turns out to be more than a coincidence when they meet a Marine with a grudge against the playwright. (Synopsis from WikiA)

The network has titled the Third TV Special as “One Piece Special 4: Last Stage,” which gives the idea that this special will be fourth special that is set to air, instead of the third.

ONE PIECE: The Detective Memoirs of Chief Straw Hat Luffy

In an alternate reality world that takes place in 19th century Japan, Luffy acts as a member of the secret police. This is made up of two adventures. In the first, Buggy makes trouble in the town. In the second, a mysterious girl named Vivi appears. (Synopsis from WikiA)

The network has titled the Fourth TV Special as “One Piece Special 3: Detective Story”, which gives the idea that this special is set to air after the Second TV Special.

It is also set to have special cameo appearances from characters throughout the series. 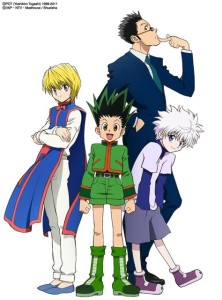 The network has also announced that they will air the 2011 reboot of the popular franchise Hunter × Hunter, produced by the anime studio Madhouse.

Hunter × Hunter follows the trials and tribulations of Gon, the 12-year-old son of Ging Freecss who disappeared 12 years ago and is today a legendary Hunter. Despite his aunt’s protests, Gon is determined to follow in Ging’s footsteps to try to understand why his father chose to become a Hunter over raising him, and hopes that he will one day find his father and be recognized as a great Hunter in his own right.

Although a country boy, Gon has a sparkle in his eyes and high aspirations. Beyond his young years, Gon is composed and courageous even in the face of tough tests and dangerous adversaries. Naturally talented, he possesses superhuman senses, uncanny learning potential, great social skills and immense determination, yet can be reckless and irrational at times. Gon’s journey starts on his long, arduous trip to the Hunter qualification examination, along which he befriends Killua, Kurapika and Leorio, fellow candidates who share his great desire to become Hunters.

Killua Zoldyck, who wields electricity as his weapon, is trying to leave behind his murderous life as a member of a notorious family of assassins. Kurapika, the last surviving member of the Kurta race whose irises turn scarlet when angry, is striving to avenge his people who have been slain for their valuable eyes by thieves named the ‘Phantom Troupe’. Leorio Paladinight is an aspiring physician who dreams of providing free medical help to the poor after he had lost a friend to an illness that he could not afford to get treatment for. Embarking on an amazing adventure that begins with the Hunter exam as Gon and his friends navigate a deadly jungle, hunt down other candidates, kill a wild boar, run an extraordinarily long underground marathon, and even make sushi! (Synopsis provided by ANIMAX)

The anime series was first aired in Japan on October 2011, and currently has 111 episodes. It is also being aired by Pan-regional anime channel ANIMAX Asia on April 2012, and has just aired “Part 3” last May.

Also announced by the channel are the Terrestrial TV airing of Bleach movies “Fade to Black” and “The Hell Verse”, following the airing of the second movie “The DiamondDust Rebellion” last June.

The two anime movies was also aired on the Filipino-language anime channel HEROtv, which is owned by ABS-CBN’s cable subsidiary, last May and June respectively.

Cross Fight B-Daman, the third anime adaptation of the B-Daman toy line, is also set to premiere on the network this year.

Aside from One Piece, New seasons of popular anime titles such as Detective Conan, Fairy Tail, Bleach, Doraemon, and Hayate the Combat Butler.

You may watch GMA Channel 07’s “Astig Authority” line-up for 2014 on the video below.